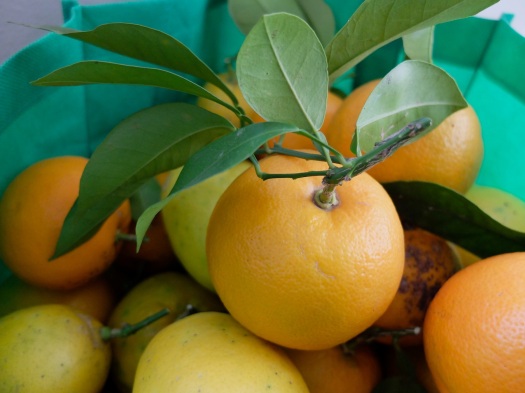 Hello again, and welcome to 2014 at the Brenham Cottage.

We are expecting serious cold tonight and tomorrow. While the brunt of the “polar vortex,” as some meteorologists have called it,  is sweeping through the Midwest with almost unimaginable cold, it’s frigid enough here in Central Texas to bring out the freeze cloth. That is a chore I rarely bother with, preferring to let the little darlings either fend for themselves or perish to make room for the new come spring. This is the first winter in some time in which the garden looks like it’s been through an actual winter, with perennials already frozen back.

The cool-weather veggies in their aluminum tanks (mostly radishes, kale, chard, lettuces, pak choy and some just-planted red onion starts) would probably survive, but I took the step of covering them and the herbs since we’ll see dips into the mid-20s for 6 or 8 hours tonight and tomorrow.

But what to do with the big bitter orange trees? They’re loaded, and the experts at Texas A&M say citrus fruit will freeze at these temperatures. An entire low section sprouted on one this year that has apparently reverted to its lemon graft, and it is loaded, too. Mr. Slicer would normally have wanted that mess pruned up, but we have a Situation next door, and the lemon branches provide a good, thorny screen.

I picked a grocery bag full this afternoon, plenty for a couple of batches of marmalade, but hate to see the biggest part of the harvest lost. Although something made a lot of them ugly this year, all pock-marked. (One friend says its residual weakness from the drought of two years ago; another friend says we got too much rain this summer.)

If only the Situation that resides a few feet from the bitter oranges would freeze and go away so easily. It has a criminal record, a powerful stereo, a couple of rebel flags and some outrageously loud motors that it likes to rev up for no apparent reason than to bully the neighborhood.

2 thoughts on “A Polar Vortex Situation”

As I was sayin’